Fuel Door Warpage... This little bad boy was causing some type of obtruction when I tried to use the reserve setting. So, whatever, Yamaha had in mind, is now HISTORY... I reinstalled the lower screen without the trap door. 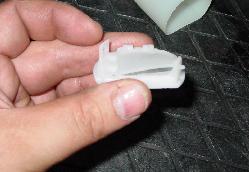 So begins the job of fabricating and installing the Quick Dump fueling system. I'll cover the vent system in another section. There is something inherently wrong with cutting into a perfectly good gas tank...

Be forewarned. If you screw up, the gas tank comes out the engine compartment area. Wouldn't that just SUCK. 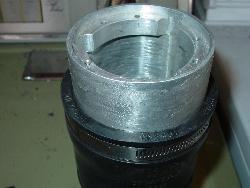 -The adaptor, welded by some unknown shop. 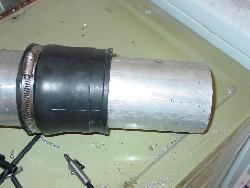 -The rubber sewer line connector over the 3"OD Aluminum Tubing. 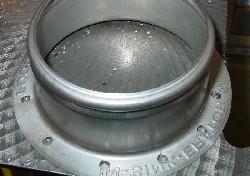 -The "insinkerator" flange. The heart of the system!

CThis is the flange installed. I used JB weld on the second installation with SST wood screws. The first one, I used a rubber gasket and 1211 with machine screws. The 1211 and the rubber gasket kept pulling out. The JB weld is stronger/tighter/cleaner/ and does not break down around gas. Notice the black paint on the flange, and the remnants of it on top of the tank? I used spray paint to mark the holes for drilling.The insinkerator, er... high tech quick dump flange mounted with #4 screws, nylocks, fender washers. 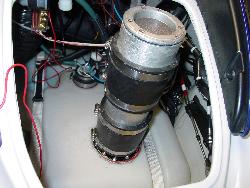 Final assembly mounted on top of the fuel tank. This one was using the rubber gasket and machine screws. 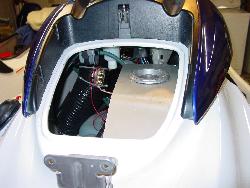 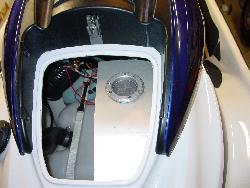 -Side view of support plate and assembly. 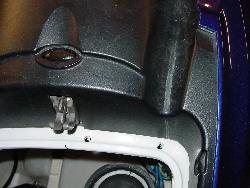 Holes are drilled in the rear of the hood area, behind the lip to support the plate. 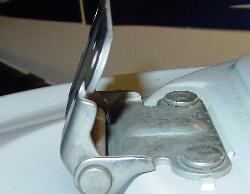 -Side pic of stock hood hinge, before cutting. 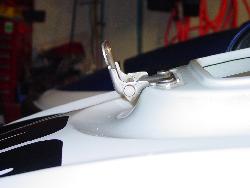 -Side pic of modded hood hinge, after grinding. Unfortunately, I went TOO far. The hood installed hits the top deck. Whoops....Another $50+ dollar mistake. However, it has lasted a few months now. I put a cushion on the outside of the plastic hood assembly to help it not break. So far, so good. However, it's just a matter of time. 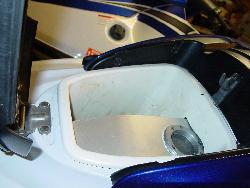 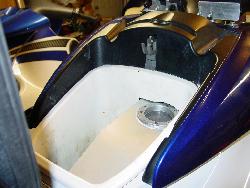 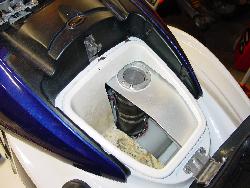 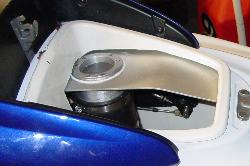 It's pretty much complete. However, now I've made an internal vent system..

Testing at Saguaro took place the next week. We used 10 gallons in a vented non-connected dump can. We used the stock fill neck as the tank vent. There was no wind, waves, competitors, or tech inspectors to slow us down or cause mistakes... 10 gallons dumped within 7 seconds. It felt like it was too fast to believe!!! There was no spillage, and because of lack of a proper vent system, we did not even try to fill the tank to the top. More importantly, the dump can was hard to handle, and weighed around 75 lbs. It would have been very easy to spill due to any gas getting in the vent tube. As far as been a race ready system, we are far from finished.